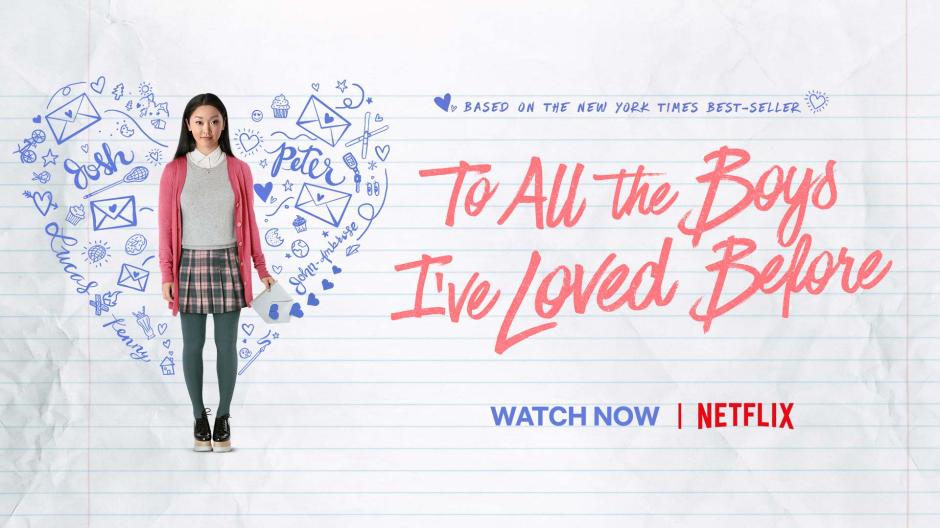 So naturally, Valentine’s day is coming up so I had to make sure I posted something valentine’s related. So, To All The Boys I’ve Loved Before. The third movie is ready to air on Netflix on the 12th of February following consecutive years of pre-Valentine’s Day premiers. The first two movies were a big hit however, I personally felt let down by the second movie, I felt like it created continuity errors and made me like almost all of the characters less. So, I asked on my Instagram whether y’all wanted a TATB post before or after number three and I got a resounding response to before, so here is everything that doesn’t make sense or that I find annoying in the first two movies.

Quick reminder – this will not be related in any way to the books and I will therefore not refer to them, if the books explain things better I find that irrelevant however still feel free to let me know.

Firstly, Josh treats Lara-Jean like a kid, but they’re like the same age? Because he’s younger than Margo but used to be childhood friends with Lara-Jean. So why does the whole first scene of him high-fiving her make me feel like he sees her as the kid sister of his girlfriend.

“Mom told me never to go to college with a boyfriend”, well that’s sage advice, so, say Margo is 18 because she just graduated and Kitty is like 12. If Kitty was still eating baby food when their mum died then… Margo was probably like 8. She probably told her 8 year old daughter, if you have a boyfriend honey, don’t ever take him to college with you, I don’t care how much you love him. What?

Was she going to eat lunch at school with her sister who had graduated? Also, Chris?

John Ambrose wasn’t at that party? Feels like he would have been.

Someone uncomfortable using their mirrors shouldn’t be allowed to drive without a fully licensed adult, but I guess that is more of a reflection on her dad and the system with which American teens learn to drive (which I find personally terrifying).

Wearing a feminist necklace and a girl power shirt, while saying she needs a boyfriend 🤣. Nice.

John Ambrose, “from model UN”, not that kid who Lara-Jean totally had a crush on for years while they were young and he had a crush on her and now is back like nothing changed?

In the first movie she would’ve told Peter it was John not some guy? I mean she admitted everyone else.

He cant be salty about that just after going on about Gen. Still team Peter though, whoops.

I hate that door with the pole in it. It looks like they’re standing either side of a wall in different corridors.

I hate that they’re wearing the clothes from the day they broke up in that picture. It grinds my gears so much.

This ski trip is so ridiculously unchaperoned.

So, if Peter was ready to meet Gen in the hot tub on the ski trip then why did the entire scene play out how it did. If Peter was waiting to get back together with Gen than why was he being all mopey about Lara-Jean not sitting with him and telling her right then that he has a thing for her then making out with her. You can’t tell me that if he was waiting for another girl that he wouldn’t have been a bit worried about her coming down and seeing that or Lara-Jean finding out he was there to meet Gen. It just doesn’t work.

Similarly, if Gen was meeting Peter in the hot tub what was she doing looking out of a random window down at the hot tub?

Peter should have cleared up the video thing. Also, anonymously emailed Instagram, she could just have like, reported it. There is no need to be anonymous?

Who is this and why wasn’t he in the first movie if he knew them so well as kids?

The change in address, I’m sure lots of you saw it flying around the internet when they decided they would just change the address that Lara-Jean sent the letter to and thought no one would notice, well… we did. Which makes it even more glaring because if John Ambrose lived in California when she wrote him the letter, then look, she didn’t live in the same town as him obviously.

So obviously we have to start with the recasting of John Ambrose which makes me question whether they really did not have faith that they would make a second movie and therefore didn’t cast someone to play him as the later character.

The balloon they let in the sky isn’t the same one from the previous shot. Sorry but it isn’t.

Lara-Jean is so incredibly annoying in the second movie!

For serious, the model UN doesn’t work. AND THEY HAD THE SOURCE MATERIAL IN THE BOOKS TO NOT MAKE THESE MISTAKES!

Why did Maddie Zeigler accept this role, she’s better than this. I want to see Maddie Zeigler star in her own, non-controversial, teen romance movie. I mean Eva from Dance Moms got one.

Obviously he cant text during practice, and like, he showed up. Also, I think every coach has a rule like that, don’t text during the middle of practice. How is he going to safely train lacrosse and play lacrosse while looking at his phone.

NO singing in number 3 please. Please!

Her necklace disappears and it’s so annoying, seriously go watch it again because she has a necklace on, then she says put it on for me, he is holding the locket, she turns around and doesn’t have a necklace on.

She should’ve told John earlier that she was dating Peter.

Again, so when they break up Lara-Jean is all like oh well if I hadn’t come to the hot tub you would be with Gen, but that isn’t true obviously because she broke up with him for like a couple of months or something over Christmas and Thanksgiving, he didn’t get back together with Gen in that time. It also kind of isn’t his fault that Gen was still into him, yes all of this stuff that doesn’t make sense is bad on Peter but it isn’t 100% him.

I think Lara Jean was leading John on the whole movie, I’m on team not Lara-Jean.

Why would they throw a garden party at the time of year when its cold enough to snow?

But not in the same night…

And finally, them floating into the sky at the end makes me want to throw up, like my god, they go from standing on the ground to floating above the house, that is awful.

So, don’t forget number 3 comes out just before Valentine’s on the 12th. Let me know in the comments if you’re planning to watch it or not and whether you were team Peter or team John in TATB2. I haven’t decided if I want to watch the third one yet but if you want a post about it too let me know. Thanks so much for reading as always, you can check out my previous posts, social media or follow my blog down below. Don’t forget to like, comment or share if you enjoyed it.

Spin offs you should and shouldn’t watch!!

So Ginny and Georgia wants to liken themselves to Gilmore Girls; lets see shall we…

The Gilmore Girls spin off I actually want to see…